February 05, 2016
There is a growing consensus that the brain uses Bayesian to perform cognition. Our brain is capable of learning using only positive examples, unlike the approach taken in machine learning where there is a need to provide both positive and negative examples. Consider an example where a parent says to a child “Look at that dog!” A child is capable of categorizing all future dogs it looks at from only one or two examples. The brain of that child is generalizing using some form of Bayesian inference. Welcome to the world of One Shot Learning.


The discovery that Bayes himself abandoned for unknown reasons, today stands at the forefront of making Artificial Intelligence a reality. Learning from few examples is what we are good at, and any intelligent machine is expected to do. Thanks to Pierre Simon Laplace who rediscovered it and gave Bayes' theorem a mathematical form, cognitive AI research uses Bayesian to make machines learn. 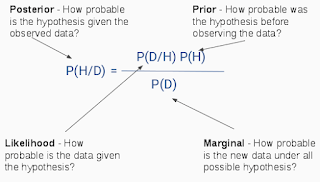 The above formula calculates the probability of a hypothesis given new data. Any Artificial Intelligent System should use this fact to update its beliefs when new evidence arrives.


Eric G. Miller, Nicholos E. Matsakis and Paul A. Viola suggested that using probability density over the set of transforms may be shared by many classes, and demonstrated how using this density as “prior knowledge” , a classifier based on a single training example for each class can be developed. [1]


Li Fei-Fei, Rob Fergus and Pietro Perona presented a method for learning object categories from just a few images. In their Bayesian framework: Object categories are represented by probabilistic models, “prior” knowledge is represented as a probability density function on the parameters of these models. The “posterior” model for an object category is obtained by updating the prior in the light of one or more examples. They demonstrated this method on four diverse categories (human faces, airplanes, motorcycles, spotted cats). Three categories are first learnt from hundreds of training examples, and a “prior” is estimated from these. Then the model of the fourth category is learnt from 1 to 5 training examples, and is used to detect new exemplars a set of test images. [2]


Bayesian is used in many fields including animal learning, language processing and acquisition, visual scene perception and many more[3]. Leading universities have dedicated teams that are applying Bayesian techniques in cognition. Josh Tenenbaum and his Computational Cognitive Science group at MIT explores computational basis of many aspects of human cognition including learning concepts, judging similarity, learning word meanings and syntactic principles in natural language. They are betting on Bayesian techniques and their results closely matches with human subjects. The results of their research will have a huge impact in the world of Information Extraction, Virtual Assistants and robotics.


Generative models can be programmed in Church, a probabilistic programming language. Church makes it easy to develop generative models as it includes a novel language construct, the stochastic memoizer, which enables simple description of many complex non-parametric models. [4]


Although there is a debate as to whether the brain uses Bayesian, or whether Bayesian techniques closely mimics the cognitive learning features of the brain, applications of AI will use Bayesian, no matter which side wins.