May 02, 2017
The following article gives an overview of the paper "Projection Pursuit Regression” published by Friedman J. H and Stuetzle W. You will need basic background of Machine Learning and Regression before understanding this article. The algorithms and images are taken from the paper. (http://www.stat.washington.edu/courses/stat527/s13/readings/FriedmanStuetzle_JASA_1981.pdf)

What is Regression?
Regression is a machine learning technology used to predict a response variable given multiple predictor variables or features. The main distinction is that the response to be predicted is any real value and not just any class or cluster name. Hence though similar to Classification in terms of making a prediction, it is largely different given what it’s predicting.

A simple to understand real world problem of regression would be predicting the sale price of a particular house based on it’s square footage, given that we have data of similar houses sold in that area in the past. The regression solution will be found by coming up with some equation of the form:
Sale_price = square_footage * price_per_sq_ft + some_base_price.

It is the task of the algorithm to find the values of the “price_per_sq_ft” and “some_base_price” that best fit the given data. Such a form of regression is termed as Linear Regression, simply because the response variable is “assumed” to be a linear combination of the multiple input predictor variables.

Although linear regression is simple to understand and implement, it has it’s own set of limitations. The limitation lies in the assumption made by linear regression. It assumes the function of the regression surface to be a direct linear combination of the predictor variables. While it greatly reduces the task to just finding the correct coefficients (or weights or parameters), it bears the cost of inaccurate predictions.

Projection Pursuit Regression (PPR) is a non parametric regression algorithm used exactly to overcome this limitation. PPR starts with a more general assumption for the regression surface to be found. It then refines the assumption in successive iterations and simultaneously also finds the parameters that fit best. PPR is more suitable for getting accurate predictions in real world prediction problems where the nature of regression surface, though unknown, is at least definitely not linear. 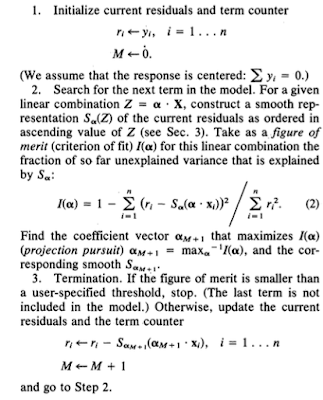 An important part of the algorithm is determining the function S which is commonly known as the smooth function. Smoothing technique in most basic terms finds a function which fits a set of data points. It does so by finding more potential points which may fit the function. These new points are found by taking an average of already existing neighbour points.

The paper exhibits the working of the algorithm with a couple of example datasets.

In this example, dataset with the above model is used and PPR as the result gives the equivalent equation as follows:
Y = 0.25(X1+X2)2 - 0.25(X1-X2)2
The following figures give a graphical interpretation of the steps of the PPR algorithm. 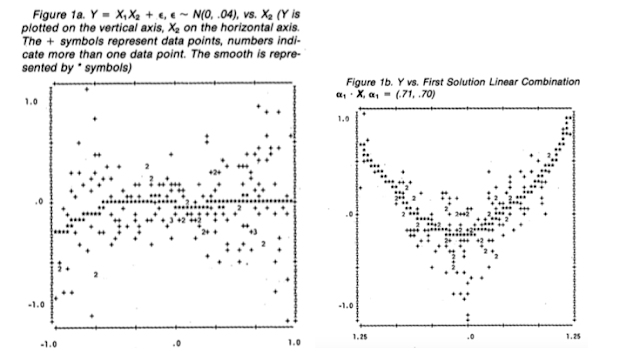 Figure 1a: Initial plot of Y v/s X2 shows that the smooth (denoted by *) hardly fits the data points (denoted by +). Hence Y is certainly not just directly proportional to X1 or X2 alone.

Figure 1b: This plot shows Y v/s S1(alpha1. X). It is clearly seen that this smooth nicely fits the data points and is parabolic in nature. The first term of the equation is thus obtained as 0.25(X1+X2)2 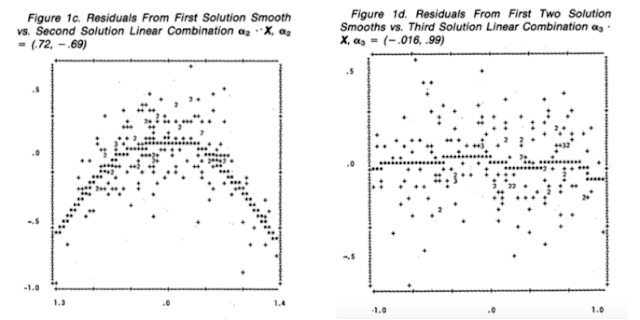 Figure 1d: This plot shows residual from previous round v/s S3(alpha3. X). Since it’s not a good fit, this term is discarded. Mathematically too, in this iteration the figure of merit I(alpha) is less than the pre-decided threshold and the algorithm is terminated.

Example 2:  Air pollution Data
The relation between the amount of suspended particulate matter (Y) and predictor variables mean wind speed (X1), average temperature (X2), insolation (X3), and wind direction at 4:00am (X4) and 4:00pm (X5)
Following were the plots obtained for the 3 iterations of the PPR algorithm. All three plots show the smooth to be a reasonable fit, and the regression surface is the combination of all the smooth function terms.

Conclusion
Following are some of the advantages of projection pursuit against other techniques:
Linear regression < Projection Selection < Projection Pursuit Regression
Projection Pursuit Regression is certainly more general in it’s assumptions and hence tends to give better approximations of the regression surface.  It can surely be used as an approach for the real world datasets where there is a possibility that linear regression will fail because of the restricting assumptions.

February 27, 2016
Anomaly detection refers to the problem of finding patterns that do not conform to expected behavior [1]. In the last article "Understanding Neocortex to Create Intelligence" , we explored how applications based on the workings of neocortex create intelligence. Pattern recognition along with prediction makes human brains the ultimate intelligent machines. Prediction help humans to detect anomalies in the environment. Before every action is taken, neocortex predicts the outcome. If there is a deviation from the expected outcome, neocortex detects anomalies, and will take necessary steps to handle them. A system which claims to be intelligent, should have anomaly detection in place. Recent findings using research on neocortex have made it possible to create applications that does anomaly detection. Numenta’s NuPIC using Hierarchical Temporal Memory (HTM) framework is able to do inference and prediction, and hence anomaly detection. HTM accurately predicts anomalies in real
14 comments
Read more